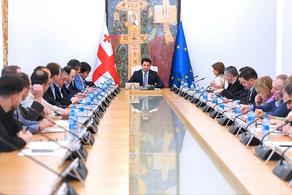 The Constitutional Court has approved its summary protocol concerning the 2020 proportional elections, with the opposition having supported it along with the majority members.

The Chairperson of the Parliament assessed 11 public meetings throughout the country and thanked the public for its active involvement in the discussions. According to Archil Talakvadze, 2020 proportional voting system in the 2020 parliamentary elections has unanimous support by the public.

“Interesting and constructive meetings have been held with the left-wing party’s position getting closer to that of the ruling party. Likewise, politicians’ opinions are getting closer to the publics. We have discussed important issues and answered crucial questions. The citizens showed interest in the issue of representing the regions’ interests in the parliament, whose members will be elected through a proportional system. Discussions on blocs and barriers were held; also, questions on the manner of cooperation among the political parties in the next parliament and our ability to use this landmark moment to make Georgian politics more balanced, democratic and peaceful were asked,” declared the Chairman.