Davit Sergeenko: The leitmotif of the election campaign will be caring for voters 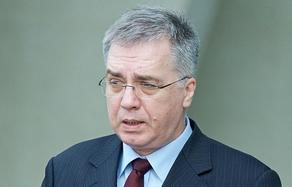 "Taking care of the voters will be the main leitmotif of our pre-election campaign," Davit Sergeenko, the majoritarian candidate of the Georgian Dream in Saburtalo, told reporters.

According to Sergeenko, the main thing is not to spend time arguing with a competitor but to focus on how to help and support the voter.

"As for why I am returning to active politics after leaving the minister's post, I want to say that the professional life of international health ministers is 3-4 years, there were two exceptions, and I stayed on the position for almost seven years which was more than enough. The new energy was needed. I have a specific task. In Georgia's recent history, I have not seen a political party that has raised the priority of healthcare to such a level and has been able to do so many things," Sergeenko said.