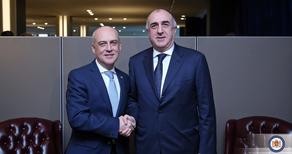 Within the framework of the UN General Assembly David Zalkaliani met with Elmar Mammadyarov,the Minister of Foreign Affairs of Republic of Azerbaijan. The ministers discussed the agenda of bilateral and multilateral cooperation once again emphasizing the strategic partnership and good relations between Georgia and Azerbaijan.

Discussing the current issues the Ministers welcomed the resumption of meetings within the framework of the Georgian-Azerbaijani border Delimitation and Demarcation Commission and the parties' expressed the readiness to resolve the issue through a constructive approach. The work of the expert groups on the unspecified sections of the Georgian-Azerbaijani border was positively evaluated.

The Ministers also discussed the organizational issues of the Azerbaijan-Georgia-Turkey trilateral ministerial which will be held in Tbilisi in October.

Positive reaction was given to the active cooperation within the GUAM (Organization for Democracy and Economic Development) and regular practice of holding GUAM ministerial meetings within the UN General Assembly.