Davit Zalkaliani met with the Secretary of State to Vatikan 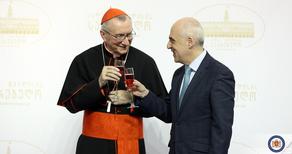 The Minister of Foreign Affairs, Davit Zalkaliani, met with the Secretary of State to Vatikan, Cardinal Pietro Parolini, during the reception organized to honor his visit to Georgia.

The Minister of Foreign Affairs underlined that the historical relationships between Georgia and the Holly Church have deepened during the last decades.

“Thank you for visiting Georgia. It is our honor to host the Secretary of State to Holly Church. We are particularly happy with the opportunity to host you in 2019 because it is the jubilee year of the relationships between Georgia and the Holly Church, which is associated with multiple essential events”, - stated Davit Zalkaliani in his speech

On his part, Cardinal Parolini expressed gratitude to the civil and clerical government for warmhearted hosting.

“Even a few hours are sufficient in Tbilisi to feel the benevolence of the Georgian people, be attracted by their values, culture, and religious traditions. Let me greet you on behalf of Pope Francis, who had stated while visiting Georgia - “The centuries-old history of your country, your culture, language, and traditions reflected in the values will define the useful and specific place in European civilization.”

According to the statement by the Secretary of State, the Holly Church was one of the first in the international community to recognize the independence of Georgia and open its Mission in Tbilisi.