Davit Zalkaliani: We are united on the path to European integration 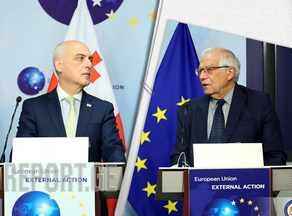 "We arrived in Brussels for the first time in the format of an associated trio. This visit proves once again that Georgia, Ukraine, and Moldova are united on the path of European integration," the Georgian Vice Prime Minister, Minister of Foreign Affairs Davit Zalkaliani, stated after meeting with the High Representative of the European Union for Foreign Affairs and Security Policy, Josep Borrell.

According to the Foreign Minister, all three countries have to face common challenges.

"Russia's occupation of Georgian and Ukrainian territories and the conflict in the Transnistria region of Moldova put European security at risk," said the Minister.

He thanked Josep Borrell for the EU's involvement and political role in resolving conflicts in the region.

According to the Minister, the subsequent illegal arrest of Zaza Gakheladze is another clear proof that the Russian occupation regimes are neglecting humanitarian issues.

"I hope that our European partners will continue supporting the sovereignty of our countries, democratic development, and European integration," he said.

The Vice Prime Minister of Georgia, Minister of Foreign Affairs Davit Zalkaliani, visited Brussels in connection with the meeting of Moldova and Ukraine and Georgia, the associated trio where he met Josep Borrell.