Deputies in Parliament physically confronted each other - VIDEO

Deputies in Parliament physically confronted each other - VIDEO 12 November, 2019  14:40 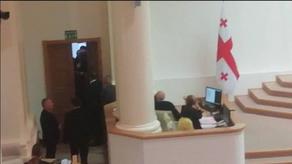 Lursmanashvili's irritation was prompted by a replica made by Gogiachaishvili towards Irakli Kobakhidze, the former Chairperson of the Parliament.

Prior to the physical confrontation, the plenary session in the Parliament was being held amid accusations and verbal confrontations. At the beginning of the session the noise was followed by the statements made by Akaki Bobokhidze, the Member of European Georgia.

Afterwards, Independent Deputy Gedevan Popkhadze said that the majority was responsible for the developments around the Patriarchate, which led to angering Mikheil Kavelashvili. Because of the noise, the session lasted more than an hour.

A break has been announced in the Parliament.