Dimitri Khundadze: We did not get answers 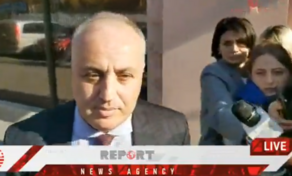 "We did not get answers to our questions", Dimitri Khundadze said after the Parliamentary Majority meeting. According to him unlike other meetings, this one was not tense.

At the meeting he was allowed to present a draft law on the electoral system, but Bidzina Ivanishvili and other members of the Majority are against the initiative.

Dimitri Khundadze and his teammates plan to introduce the bill to the public and collect 200,000 signatures necessary for initiating the bill.

Several majoritarian deputies of the Georgian Dream are demanding the transition to a fully majoritarian system. Dimitri Khundadze is among them.