Erekle Kukhianidze's issue to be discussed at majority meeting

Erekle Kukhianidze's issue to be discussed at majority meeting 16 December, 2019  16:38 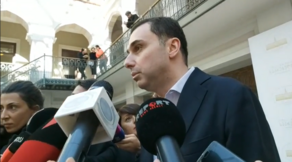 According to Giorgi Tkemaladze, the Chairman of Tbilisi City Assembly, the consultations will be held at the majority meeting, and decision regarding Erekle Kukhianidze will be announced.

"This statement was emotional, incorrect, and I would like to ask everyone to refrain from making statements at times like this," Tkemaladze said.

According to him, the ruling party is doing everything to release Vazha Gaprindashvili as soon as possible.

Civil Movement and Change have organized a rally demanding the resignation of Erekle Kukhianidze, the deputy of Tbilisi City Assembly. The members of the movements are protesting the statement made by Kukhianidze regarding Gaprindashvili.