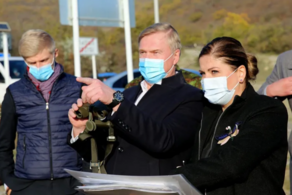 The Minister of Defense of Estonia, who is paying an official visit to Georgia, saw the occupation line in the village of Odzisi.

A representative of the Information-Analytical Department of the State Security Service provided detailed information to the Minister of Defense, Kalle Laanet, regarding the difficult situation on the ground due to the occupation.

During his visit to Georgia, the Estonian Defense Minister received detailed information on the destructive steps taken by Russia, including the occupation, the policy of annexation, and disinformation.