European observers to visit more than 1,000 electoral precincts in Georgia 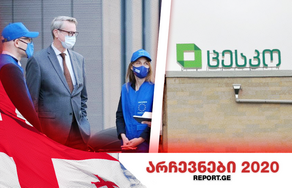 Georgian citizens are now casting votes to elect the tenth convocation of the Georgian Parliament. Election observation teams of European diplomats, the number of which will exceed 70, will be deployed in more than 1,000 electoral precincts across Georgia to assist OSCE/ODIHR observers.

According to EU Ambassador to Georgia Carl Hartzell, the name of a winning candidate is not important for the Georgia-EU relations to develop properly. How the winning candidate will emerge victorious is what is vital. "On election day, we will perform an unprecedented function of active monitoring of the elections. On Saturday, along with the EU member countries and our European partners, we, the team of European diplomats, will carry out a large-scale and coordinated observation. Together, we will deploy more than 70 teams and visit more than 1,000 polling stations" he said.

he European diplomats' team is comprised of the EU delegations in Georgia and the employees at the embassies of EU member countries, including the embassies of Austria, Bulgaria, the Czech Republic, Estonia, France, Germany, Greece, Hungary, Italy, Latvia, Lithuania, the Netherlands, Poland, Sweden, Norway, and Switzerland. The process will also be coordinated by the U.S. and U.K. embassies.

The members of the election observation teams of European diplomats will take all anti-coronavirus precautionary measures in performing their duties.