Ex-leader Saakashvili: I already looked their fear in the eye and saw their imminent defeat 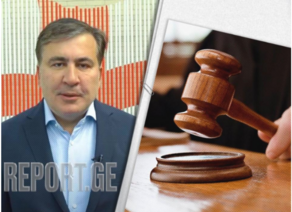 Mikheil Saakashvili's note in which he shows gratitude for the opportunity to address his people has been posted on the ex-president's official page.

''I am grateful for today's opportunity to address the Georgian people. Everyone knows that the cases against me are manipulated, and I should not be behind bars. I must be freed immediately after well-documented facts are presented in line with the international practice.

Do you know what is today's anecdote? While they were trying me for dispersing protesters, the Georgian Dream was cracking down on peaceful rally participants outside the court building, jailing them unfairly, including my friend Gigi Ugulava, whose whereabouts they determined only after a couple of hours' search in Marneuli.

Whatever the Georgian Dream does, I already looked their fear in the eye and saw their imminent defeat. I know without the shadow of a doubt that the Georgian people will soon put an end to Ivanishvili's regime. Many thanks for your support. Not a single step backward!'' Mikheil Saakashvili's note reads.