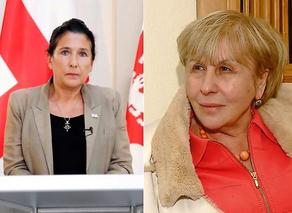 Ex-president Mikheil Saakashvili's mother, Giuli Alasania, has responded to President Salome Zurbishvili's statement. In Alasania's words, the statement gave her hope by making her think that her son would be transferred to a civilian hospital.

''She said that the process must be public and transparent. She also said that the person's health must be the main focus. It seemed to me that her words were positive,'' Giuli Alsania stated.

Former President Mikheil Saakashvili, detained on 1 October, has been on a hunger strike for 48 days now.