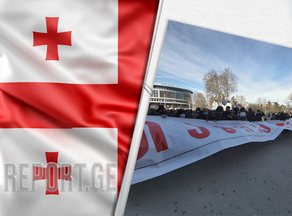 The opposition-led protest and march called For Freedom has already started.

Opposition leaders and their adherents have begun the march at the Philharmonic Hall and are heading to the parliament.

At 3 p.m., protesters will gather outside the parliament, where opposition leaders will make their speeches and provide people with details about their action plan.

Fire crews and special equipment are already on the rally site now, with citizens joining the rally from different regions of Georgia.