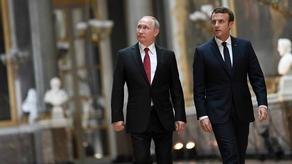 French President Emmanuel Macron has talked about Georgia with his Russian counterpart, according to Davit Zalkaliani, the Minister of Foreign Affairs of Georgia.

As per Davit Zalkaliani, his French colleague confirmed that one of the main topics of the meeting was the challenges related to the current situation in the breakaway regions of Georgia. "We also talked about the Geneva format. As you know, France initiated completion of the 2008 ceasefire agreement. Unfortunately, Russia has refused to perform its obligation so far," Davit Zalkaliani declared after the meeting with Jean-Yves Le.

Mr Zalkaliani also stated that they have discussed the existing situation on the occupied regions of Georgia and the issue of illegally detained doctor Vazha Gaprindashvili, as well as the steps to be taken in order to get support of the International Community.