Gakharia: 7 August is a woeful day in our country's recent history 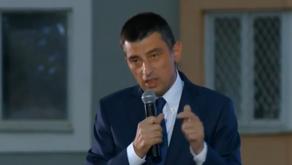 In the statement, which PM Gakharia has released today, he said that peace is the only possible path despite Georgia being occupied by Russia.

"Today is 7 August, the woeful day in our country's recent history. This is the day when our country lost its citizens, soldiers, 20% of its territory after the fateful war. Today, our country, which was occupied by Russia 12 years ago, has lots of IDPs in need of care by the state. We all understand that 251 apartments which we gifted our citizens who were forced out their own houses after the war and who have not had a roof over their heads are only a drop in the ocean. Despite the state having provided its IDPs with more than 21,000 apartments since 2013, and by the end of the current year, 2,000 more IDPs will be provided with accommodation, it is still a drop in the ocean, for our duty is to serve our citizens and ensure their comfortable lives. We all should strive to return to our land peacefully, as peace is the only path," the Prime Minister declared.

PM Gakharia and Ekaterine Tikaradze, the Minister of Minister of Internally Displaced Persons from the Occupied Territories, Labor, Health and Social Affairs of Georgia, provided 251 IDP families with flats.