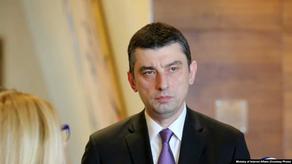 Georgian Dream has nominated Giorgi Gakharia as the candidate for Prime Minister’s position. He was nominated by Chairperson of the party Bidzina Ivanishvili after the completion of a one-hour meeting of the Political Board.

Gakharia has held the post of Interior Minister so far.

For more than two months, protest actions demanding Gakharia’s resignation have been underway. The actions started after law enforcers dispersed demonstrators protesting against Russian occupation in front of the parliament building. More than 2 hundred people were injured, with some of them losing their eyes. Before dispersion of the protesters, some of them attempted to break into the parliament.

Giorgi Gakharia has occupied the post of the interior minister since 13 November 2017. At the same time, he serves as vice premier of Georgia and secretary of National Security Council.

Under Interior Minister Giorgi Gakharia, we witnessed different high-profile cases, such as the special operation at Tbilisi night clubs followed by protest actions, Pankisi special operation, Zviad Ratiani’s case and the so-called Gavrilov’s night of 20-21 June, when during protest actions, more than 200 people were injured, with some of them losing their eyes and two people having been taken to the hospital, where they were connected to an artificial respiration apparatus. Since June 20, demonstrations demanding Gakharia’s resignation have been regularly conducted at Rustaveli Avenue.

Before appointment as Interior Minister, in 2016-2017, he served as Minister of Economy and Sustainable Development, in 2014-2016, he was the Secretary of Economic Council and earlier, from March 3013 to July 2016, he held the post of Georgia’s business ombudsmen.

Before holding high posts in Georgia, in 2008-2013, Gakharia served as director of Lufthansa Service Holding AG. LSG, Frankfurt am Main, Germany GR &Business Development in Eastern Europe, in the countries of the Commonwealth of Independent States and the Russian Federation. In 2006-2009, he cooperated with Moscow State University as an invited lecturer.