Gakharia receives Letter of Congratulations on his appointment as PM

Gakharia receives Letter of Congratulations on his appointment as PM 24 September, 2019  19:01 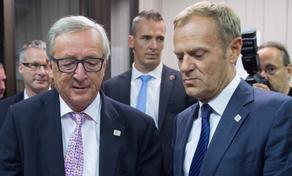 Donald Tusk, President of the European Council, and President of European Commission Jean-Claude Juncker congratulated Giorgi Gakharia on being appointed to the post of PM.

As the Congratulatory Letter reads, the European Council and European Commission remain staunch adherents of Georgia’s territorial integrity and support the Georgian Government in its efforts to keep ties with people of the breakaway regions of Abkhazia and South Ossetia.

The information has been spread by the Georgian Government’s Administration.