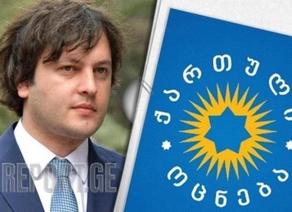 Chairperson of the Georgian Dream party Irakli Kobakhidze has paid an official visit to the U.S. and met with Sen Jeanne Shaheen and Ron Johnson together with the party's international secretary Kakha Kuchava and deputy chairman Irakli Chikovani.

Mr. Kobakhidze provided the senators with detailed information on the current political developments in Georgia and the region and listened to their opinions and recommendations.

Special emphasis was laid on the necessity of the dialogue between the ruling party and the representatives of the opposition in Georgia.

Within the framework of the visit, the Georgian delegation has met with Sen James Risch, representatives of the State Department and the WH George Kent and Chris Smith, Congressmen Adam Kinzinger and Gerry Connolly.

The Georgian delegation is set to leave the U.S. today.

The information was released by the GD Press Office.