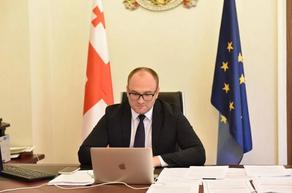 The trilateral meeting of the Chairpersons of the Foreign Relations Committees of the Georgian-Azerbaijani-Turkish Parliaments took place online.

According to the parliament's press service, meetings within the framework of the given format started in 2014. This year it was planned to be held in Tbilisi, but due to the situation caused by COVID-19, it became impossible.

During the discussion, the measures taken during the pandemic in Georgia, Azerbaijan, and Turkey held an important place. Emphasis was on the importance of cooperation and sharing of experiences between the three countries in this area. Particular attention was paid to the discussion of transport and energy projects within the Southern Corridor, both for the economic development of the three countries, as well as for the importance of these projects for the energy security for these countries and Europe, as well as opportunities for strengthening cooperation.

They discussed trade, economic, investment and tourism cooperation between the three countries and the special role of the cooperation in the post-crisis period, for the normal functioning and sustainable development of the relevant sectors of the economy of the three strategic partners.

The sides expressed strong support for the sovereignty and territorial integrity of Georgia and Azerbaijan noting the importance of a peaceful settlement of conflicts following the principles and norms of international law, in particular, the sovereignty of states, territorial integrity, and inviolability of internationally recognized borders, noted in the Protocol of Ankara signed on February 28, 2018, by the Chairmen of the Foreign Relations Committees of the Parliaments of Georgia, Turkey, and Azerbaijan.

The parties said that they do not recognize the so-called illegal elections in the regions of Abkhazia, Tskhinvali, and Nagorno-Karabakh and talked about the importance of the format of the tripartite meetings in terms of cooperation between the three strategic partners and its further strengthening.

The 6th trilateral meeting of the Chairmen of the Foreign Relations Committees of the Georgian-Azerbaijani-Turkish Parliaments will take place in Turkey," the statement said.