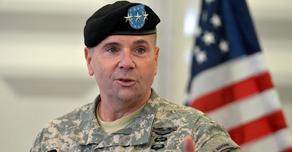 General Ben Hodges, the former Commander-in-Chief of the US Armed Forces in Europe, has made a statement at the Kyiv Security Forum saying that Georgia must immediately become a NATO member.

For Ukraine, the integration into NATO will take more time, according to Hodges.

"I believe that Georgia must become a NATO member immediately. It will take longer for Ukraine to join NATO, but it will join the alliance eventually," Ben Hodges declared.