Georgia will decide which alliance it seeks to join according to Degna 3 December, 2021  18:52 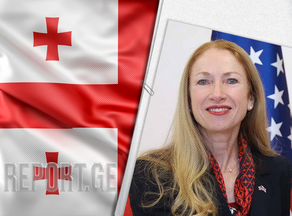 U.S. Ambassador to Georgia Kelly Degnan has responded to Russian Foreign Minister Sergey Lavrov's statements at the OSCE Ministerial saying that by repeating the Bucharest Summit theses, they are playing with fire. Degnan said that  Georgia itself will decide which alliance it seeks to join to defend its territorial integrity.

In the ambassador's words, NATO Secretary-General Jens Stoltenberg and U.S. Secretary of State Antony Blinken have made immensely clear statements at the NATO Foreign Ministers meeting according to which Georgia and Ukraine will become NATO members.

Degnan stressed that Russia's resistance is bizarre especially when it itself signed the Istanbul Convention, which says that each sovereign state can determine its military alliance.

Lavrov stated that the 2008 Bucharest Summit decision according to which Georgia and Ukraine will join NATO constitutes a threat to European security.