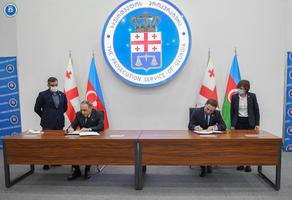 Mr. Shotadze thanked Mr. Aliyev for prolific cooperation between the two countries and introduced him to the main activities by the Prosecutor's Office of Georgia.

a) the assessment system;

b) the ranking system;

g) legalization of illegal income and seizure of property;

i) the IBM-12 program and digital transformations.

The Georgian Prosecutor-General said that close amicable and business relations link Georgia and Azerbaijan, and their justice-related cooperation is critical.

Mr. Aliyev thanked his Georgian counterpart for hosting him. The Azerbaijani Prosecutor-General focused on the significance of their cooperation and stressed that it would continue in the future.

At the end of the meeting, the two prosecutors-general signed the memorandum on cooperation.

Within the framework of the visit of the delegation of the Prosecutor General's Office of the Republic of Azerbaijan, the two high officials laid a wreath on the statue of Heydar Aliyev.