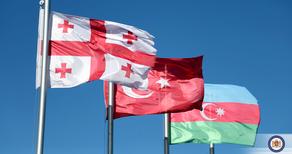 "A trilateral meeting between the Azerbaijani, Georgian and Turkish foreign ministers will be held in the shortest possible time," Turkish Foreign Minister Mevlüt Çavuşoğlu said in his statement at the joint briefing with his Georgian colleague Davit Zalkaliani.

Georgian Foreign Minister and Vice Prime Minister Davit Zalkaliani has paid a one-day visit to Ankara. After holding a joint briefing with his Turkish counterpart, Zalkaliani plans to meet the country's vice president. At the end of his visit, the Georgian minister will attend a ceremony at which the 100th anniversary of the first diplomatic mission will be celebrated at the Embassy of Georgia to Turkey.