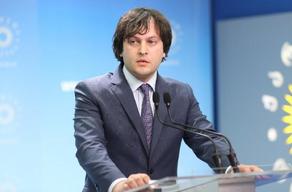 ''We have recent public opinion polls at hand. Bidzina Ivanishvili was not one of the options as he left the political scene. All other political actors' names were, of course, included. I can disclose one secret for you: Kakhi Kaladze ranks first among Georgian politicians. This is the status quo,'' Mr. Kobakhidze said.