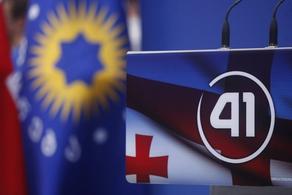 The ruling Georgian Dream-Democratic Georgia party has released a statement on the Marneuli incident.

"We witnessed UNM members' attempt to break into the district administration building, and physical abuse to which a CEC employee was subjected. Police officers arrived at the scene, and the investigation into the case was launched. However, this did not prove enough for UNM activists: in the evening, intoxicated members of the movement headed for the Georgian Dream office and subjected our adherents to verbal and physical abuse. This action escalated tensions and triggered the conflict. The government will put an end to all attempts to destabilize the country, and everyone who will breach the law will be strictly punished. The National Movement appears to follow the path of provocations and violence, which requires from us to analyze the situation and maintain our composure. We do call upon everyone to respond to their actions by holding peaceful elections. We are the team that came into power on 1 October 2012 peacefully, and we will succeed in defeating hostile forces once again," the statement by the party reads.