Georgian Dream to hold a concluding meeting in Tbilisi 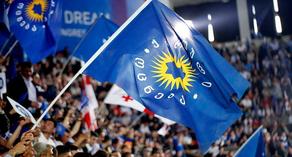 Today on October 27, Georgian Dream will hold a campaign rally in Tbilisi. The meeting will be held at Freedom Square, where preparations have already begun.

The concluding rally is scheduled for 17:00; however, as the party says, the gathering of supporters will start at 15:00 at Freedom Square.

Georgian Dream supporters from the regions will arrive in the capital for the planned rally. Part of the convoys has already left from several cities, while part will leave by 11:00.