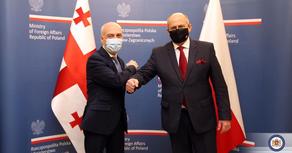 According to the Foreign Ministry of Georgia, Georgian Foreign Minister Davit Zalkaliani has met with his Polish counterpart Zbigniew Rau within the framework of his working visit to Warsaw.

The State Agency says that the ministers focused on existing close partnerships between the two countries and showed readiness to maintain amicable relations. The significance of Georgia as Poland's most important partner in the region was stressed at the meeting.

In this context, the parties saluted Georgia's and Poland's participation in the North Atlantic Council's online meeting at the level of Ministers of Foreign Affairs. The top officials emphasized that Georgia's involvement in NATO high-level meetings testifies to the Alliance's support of Georgia's Euro-Atlantic integration.

Mr. Zalkaliani also thanked his Polish colleague for the assistance Poland has provided to Georgia during the pandemic.

Additionally, the high officials focused on security-related issues in the region of South Caucasus after the latest developments.