Georgian General to be awarded high rank within NATO-led RSM 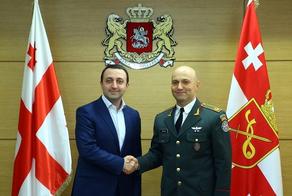 Before leaving Georgia for Afghanistan, Brigadier general Nikoloz Janjghava was met by the Georgian Defence Minister, with the meeting being attended by Chief of Georgian Defence Forces general-lieutenant Vladimir Chacibaia.

The information has been spread by The Ministry of Defence of Georgia.