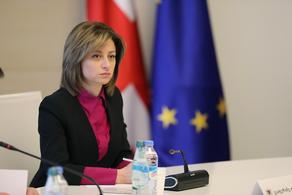 Health Minister Ekaterine Tikaradze has responded to her Armenian counterpart Arsen Torosian's statement. In her words, the Minister's statement is groundless and raises unanswered questions.

"We had phone conversations repeatedly when the pandemic outbreak started: we underwent consultations and compared the existing situation in our countries. If he had had questions, he could have used this communication channel, and I would have answered him. The figures which have been released by Georgia so far as well as the evaluations by the public testify to the fact that the results presented by Georgia's Ministry of Health may not be challenged. Therefore, we would like to know what made my colleague issue this statement, and for this purpose, we plan to contact him," Tikaradze said, adding that Georgia's government has subjected Georgian citizens to PCR testing, and the public knows that all figures by the government are trustworthy.

Armenian Health Minister Arsen Torosian questions the credibility of Georgia's COVID-19 statistical data and thinks that the country has failed to identify all COVID-19 affected citizens and include the corresponding information in the statistical data. At the online meeting, the Minister asked whether Georgia applied PCR tests in all cases, rather than rapid tests, the credibility of which is to be challenged. The Armenian Minister also wants to know whether citizens showing mild symptoms are tested and whether people dying of pneumonia are included in statistical data. Mr. Torosian also stressed that Armenia's counter-epidemic system is stronger than that of Georgia.

Director-General of the Infectious Diseases, AIDS and Clinical Immunology Research Center, Tengiz Tsertsvadze, and Head of the Center for Disease Control Amiran Gamkrelidze have also responded to the statement by the Armenian Minister.