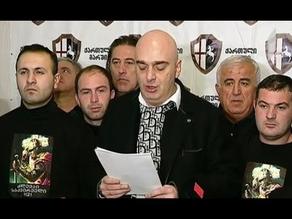 Georgian March opposes the act of protest declared by the opposition parties and joins the act announced by Patriots Alliance. The announcement is made by one of the leaders of Georgian March, Sandro Bregadze during the briefing.

According to him the country is in acute political crisis because of irresponsible decision made by a part of Georgian Dream members. Georgian March fully supports the change of existing election system to proportional one. Despite that the majority of the opposition is protesting the same, Georgian March will never stand together with the former and current representatives and the bloody leaders of National Movement party. Hence they plan to join the act of protest announced by Patriots Alliance tomorrow at 17:00 in the Republic Square.

Patriots Alliance is starting acts of protest tomorrow. The information is spread by Irma Inashvili after the November 14 voting. According to the party Leader she announced the protest before the voting started, warning that in case the bill on proportional electoral system at the plenary sitting was rejected they would start street acts in protest.