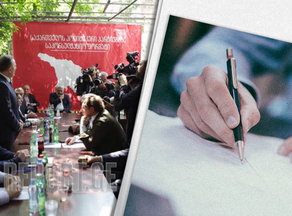 Representatives of opposition political parties have released a joint statement on the TV Pirveli-related developments.

The statement reads that the government is trying to break into the independent TV company, demonstrating alarming signs of authoritarianism.

"The regime aims to punish everybody who makes Ivanishvili and his family uncomfortable, brings their criminal acts to light, and points to the danger jeopardizing the Georgian people's democratic development.

TV Pirveli, Nodar Meladze, and their source have exposed Ivanishvili and the grave crime behind which the high officials are. In democratic societies, they launch investigations of similar crimes. The unlawful decision by Ivanishvili's puppet court constitutes a flagrant breach of the Law of Georgia on Freedom of Speech and Expression and the Criminal Procedure Code.

Georgian's will to live in a democratic society cannot be subjected to reconsideration, and the main task of the opposition is to make this happen," the statement reads.