Georgian PM: I am visiting Baku, where I will meet President Aliyev 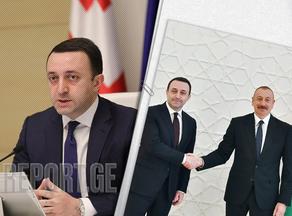 Georgian Prime Minister Irakli Gharibashvili said he is leaving Georgia for Baku, where he will meet President Ilham Aliyev.

''I am visiting Baku, where I will meet President Aliyev, who I respect deeply; we have developed perfectly good relations. Most importantly, we trust each other, and if the trust exists, all issues are resolved accordingly. I also have relations with Mr. Pashynian, who was in Tbilisi a few weeks ago. I plan to visit Armenia in the near future. I will spare no effort to play a useful role for the two countries,'' Gharibashvili declared.

Gharibashvili will pay an official visit to Azerbaijan today.