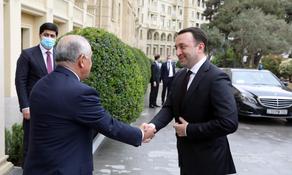 Georgian Prime Minister Irakli Gharibashvili has met with his Azerbaijani counterpart Ali Asadov within the framework of his official visit to Azerbaijan.

The parties expanded on the prospects of their cooperation and discussed the paramount projects that have been implemented lately.

At the meeting, the Georgian prime minister laid a special emphasis on the amicable relations between the two countries and focused on their future projects.

Azerbaijani prime minister, on his part, said that Azerbaijan gives great significance to Georgia-Azerbaijan relations and joint large-scale projects the countries have implemented through joint efforts.