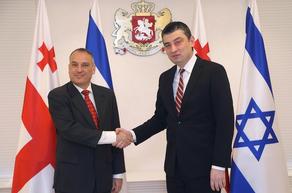 The parties have discussed topical issues and prospects in their bilateral relations.

"Positive developments of relations in various fields were underscored, and the fact that the existing great potential in trade and economic relations must be exhausted was also stressed.

Additionally, the top officials focused on the growing volume of trade turnover, and Israel's one of the leading positions among the countries whose citizens visit Georgia frequently was  stressed," The Prime Minister's Press Office says.

The projects and programs implemented by the Embassy of Israel in Georgia to promote education were also discussed and centuries-old amicable relations between the two countries mentioned.

The Georgian PM thanked the Ambassador for his country's support of Georgia's sovereignty and territorial integrity and wished him all the success.