Georgian PM: We have reaffirmed our complete readiness to hold dialogue

Georgian PM: We have reaffirmed our complete readiness to hold dialogu 1 March, 2021  20:31 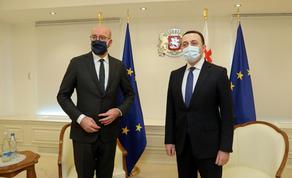 "We have reaffirmed our complete readiness to hold a dialogue with political forces to normalize political processes in the country in the short run and cope with challenges through joint efforts," Georgian Prime Minister Irakli Gharibashvili said after the meeting with the president of the European Union.

In Gharibashvili's words, the high executive has paid his first visit to Georgia, with this once again testifying that Georgia is the EU's essential partner, and the EU stands ready to keep providing Georgia with its support on the path to the EU.

"We have reiterated that Georgia's and Georgians' Euro-Atlantic aspirations have remained unchanged. Our dialogue has proved immensely prolific. We have focused on a number of vulnerable issues our country now faces. We have also mentioned that Georgia's resoluteness to join the European family is not part of political vision only; this is more than that _ the Georgian people's historic choice, and we are unwavering in our decision to preserve our values," Gharibashvili stressed.