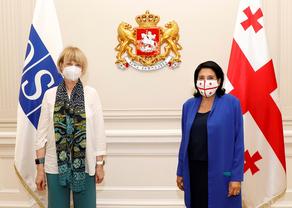 Georgia President Salome Zurabishvili has met with Helga Schmid, the Secretary-General of the Organization for Security and Co-operation in Europe (OSCE), at Orbeliani Palace.

At the meeting, they agreed upon implementing the Georgian President's initiative called Female Leaders' Concept _ Female Leders' Role in Peace and Security _ in Georgia.

The parties also discussed forthcoming local elections and underscored the significance of the involvement of monitoring missions in the elections.

The high officials also focused on the issue of Georgia's breakaway regions, unsatisfactory humanitarian conditions there, violation of human rights by the regime, commonplace abductions, and, namely, Georgian Zaza Gakheladze, who is now in illegal custody.

Additionally, Zurabishvili and Schmid discussed the situation in the region and Georgia's role in ensuring peace and stability there.