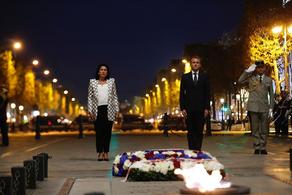 The two leaders paid homage to dead French soldiers at the Triumphal Arch.

The Georgian and French anthems were performed at the ceremony. They held a minute's silence to pay tribute to French soldiers who died for France. Following this, the two leaders presented their delegations.

After the ceremony, Zurabishvili and Macron held a meeting.