German ambassador surprised by comments on him 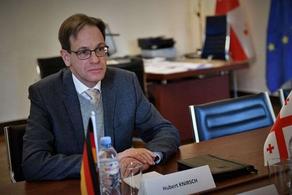 German Ambassador to Georgia Hubert Knirsch responded to the parliament's move to adopt constitutional amendments saying that he is surprised by comments about him, which he has heard recently.

"I think this is a good novelty as this is beneficial for the next parliamentary elections as the outcome will be an increase in pluralism in the parliament of Georgia. In Georgia and some other countries, too, they use immensely rude words and gestures in discussing local political issues. I am surprised by some comments on me released by people who I have never met and who I do not even know. However, I reckon this is a part of the ongoing political developments, and I believe that Georgia will overcome this. What matters now is the fact that constitutional amendments have been adopted," the German ambassador said.

Shalva Natelashvili, the leader of the labor party, declared that Georgian tycoon Bidzina Ivanishvili provides German ambassador with financial resources and appealed to the German government to return him to his country.