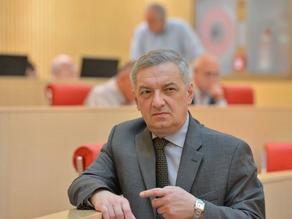 I am suspicious about all these attempts to create scandalous stories, this was vice speaker Gia Volski's response to commotion over Salome Zurabishvili's visit to the Salobie Bia cafe.

"In the present state of affairs, the Presidents has a special function not to show support for any political party and take sides with people only. The President's visit to the Salobie Bia cafe does not anyhow represent this function as being of little worth," Volski declared.

Yesterday, protesters gathered outside one of the cafe restaurants at which the Georgian President was having dinner. After information on the pastime of Zurabishvili spread, the activists decided to organize a picket outside the institution. They were blowing whistles and chanting "shame on you."

Ultimately the security forces put up a cordon at the entrance to the cafe, and Salome Zurabishvili hastily left the scene.