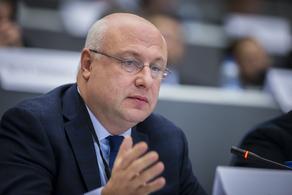 President of the OSCE Parliamentary Assembly Gigi Tsereteli had a telephone conversation with Chairperson of Azerbaijani Parliament Sahiba Gafarova and congratulated her on Republic Day.

"The top officials talked regarding the pandemic-related situation, current challenges, and the role of the parliament under the state of emergency.

The Chairperson of the Azerbaijani parliament thanked Gigi Tsereteli and underscored the importance of active cooperation with the OSCE, as well as the activities by the Assembly. They also expressed hopes that cooperation will enter a more active phase after the pandemic. The Karabakh conflict and the active engagement of OSCE in it and also mentioned.

Additionally, Tsereteli and Gafarova stressed the importance of good neighborly relations and strategic partnerships between the two countries," the statement by the Press Office of the Parliament reads.