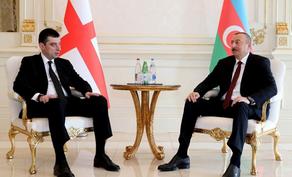 Giorgi Gakharia, the Prime Minister of Georgia, congratulated Ilham Aliyev, the President of Azerbaijan, on the victory of New Azerbaijan in the parliamentary elections.

Local media reported the news based on the information released by the press service of the President. According to them, a telephone conversation took place between Aliyev and Gakharia.

The Central Election Commission of Azerbaijan released preliminary data from 125 constituencies according to which the ruling party, New Azerbaijan will get 70 seats in the new Parliament.