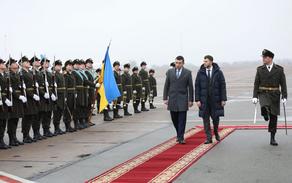 The two-day official visit of Giorgi Gakharia, the Prime Minister of Georgia to Ukraine, has begun. The official reception ceremony was held at Kyiv Boryspil International Airport. State anthems of Georgia and Ukraine were performed.

During his official visit, Giorgi Gakharia will participate in the GUAM Organization for Democracy and Economic Development Summit, hosted by Kyiv. After the plenary session of the Heads of the GUAM member states, joint statements of the leaders are planned, as well as the signing of several documents.