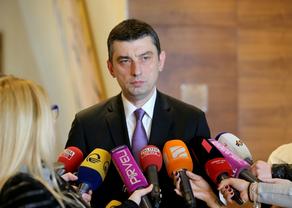 Film ‘Shindisi’ sparks extremely strong emotions. I am taking my hat off to those families who raised Shindisi heroes,” this statement was released by Georgian PM Giorgi Gakharia at The Amirani Cinema after he saw the ‘Shindisi’ film, which had been nominated for Oscars Best International Feature Film.

“It is symbolic that the film was debuted on Sept 27, the day when Sokhumi fell. This film sparks extremely strong emotions. I think that each and every Georgian citizens must see and feel this film. I am taking my hat off to those families who raised Shindisi heroes, those 17 soldiers, who sacrificed their lives in the battlefield,” declared the PM and added that precisely similar heroic deeds unite the nation.

Film 'Shindisi' was directed by Dimitri Tsintsadze. The film is based on real events that occurred during the Russian military intervention in Georgia in 2008. The film was nominated for Oscar by Georgia.

Two days earlier before the premiere, the film was shown behind closed door at the Amirani Cinema, with Georgian PM Giorgi Gakharia and ministers attending it.