Giorgi Gakharia: This is justified by criminal cases 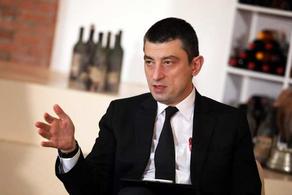 "Those who did not vote for these legislative amendments due to certain narrow, political, selfish interests are justifying it with criminal cases. I want to say that this justification will not work for our citizens," Prime Minister Giorgi Gakharia said while talking about constitutional changes.

He congratulated members of the Parliament and citizens. According to him, these are changes that the Georgian government has dreamed of since the 1990s, and only the Georgian Dream has been able to do it.

"These constitutional changes, which bring us closer to a more proportionate and ultimately proportional electoral system, mean a few serious achievements for me personally. No matter how difficult it may have been, the government was fully mobilized and did what had to be done, first and foremost, because of our citizens and the further democratization of our country. It is important that we all work together to ensure that further democratization of Georgia as its Euro-Atlantic integration is irreversible, and we have voted for that," Gakharia said.

Bidzina Gegidze and Kakha Okriashvili from the Georgian Dream and independent deputy Alexandre Erkvania, who left the majority a few months ago in protest, did not support the changes.