Girogi Gakharia: Georgia is ready to host the representatives of Azerbaijan and Armenia in Tbilisi

Girogi Gakharia: Georgia is ready to host the representatives of 30 September, 2020  16:08 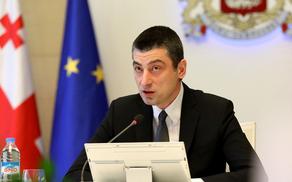 "There is a problematic situation due to the military confrontation between Azerbaijan and Armenia, with significant casualties. Unfortunately, the cessation of hostilities and the resumption of dialogue have not been possible so far.

Everyone is well aware that further escalation of the situation will have a highly negative impact on the entire region's security.

Once again, we call on the OSCE Minsk Group co-chairs and international actors to end the escalation and resume dialogue.

As you know, our country has good neighborly relations with both countries - Azerbaijan and Armenia.

Historically, our Azerbaijani and Armenian citizens living in Georgia have always played a significant part in the development and strengthening of our country, as well as the region as a whole. At the same time, their peaceful coexistence is a good example that Georgians, Armenians, and Azerbaijanis have the potential to turn the entire South Caucasus into a space of peace and development.

Our common interest is to establish peace in the region as soon as possible," Gakharia stated.