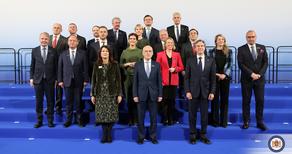 The Group of Friends of Georgia received a statement supporting Georgia on December 3, 2021, within the framework of the 28th OSCE Ministerial in Sweden.

The statement underlined the support of a group of friends for Georgia's sovereignty and territorial integrity and expressed concern over the occupation of Georgian territories by the Russian Federation.

The statement called on the Russian Federation to immediately fulfill its obligations under the ceasefire agreement, withdraw its forces from pre-conflict positions, and not interfere with the establishment of international security mechanisms on the ground.

The authors of the statement call on Russia to withdraw its recognition of the occupied regions of Georgia as the so-called independent states.

At the same time, the statement expressed concern over ethnic discrimination against Georgians in the occupied regions and called on Russia to ensure full and unhindered access to international human rights organizations in these regions of Georgia.

The statement condemned the killings of Georgian citizens Archil Tatunashvili, Giga Otkhozoria, and Davit Basharuli and called on Russia to remove any obstacles to bring the perpetrators to justice.

In this context, the adoption of the Otkhozoria-Tatunashvili list by the Georgian government is supported.

The statement supported the Geneva International Talks (GID) and stressed the need for progress on key negotiating issues. Friendly countries also support the Incident Prevention and Response Mechanisms in Ergneti and Gali and their role in preventing conflict escalation and ensuring security on the ground.