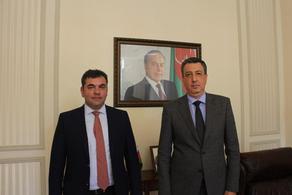 Ambassador of Azerbaijan to Georgia Faig Guliyev has met with President of Georgian Chamber of Commerce and Industry Giorgi Pertaia.

''At the meeting, they focused on the role of representatives of different business fields in the expansion of trade and economic activities between the two countries and emphasized the significance of regular bilateral visits, including organizing business forums and conferences.

The parties discussed the potential of more active cooperation between the Georgian Chamber of Commerce and Industry and Azerbaijan's corresponding bodies; they also made reference to the importance of exchanging experience among these institutions and signing the corresponding documents.

Additionally, the high officials placed emphasis on the importance of resumption of operations by the Joint Intergovernmental Commission on Economic Cooperation between the two countries. They stressed that given the increasing interest and potential of the representatives of the two countries' private sector, organizing the Azerbaijan-Georgia business forum in Baku in the near future may prove useful,'' the statement by the embassy reads.