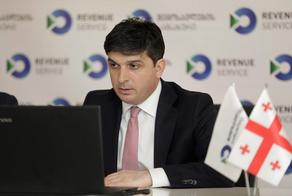 Levan Kakava, the head of the Revenue Service of the Ministry of Finance, held a meeting with the Deputy Minister of Industry and Commerce of Turkey Riza Tuna Turagay in the format of a video conference.

The parties shared information about the measures taken and planned against the economic challenges caused by COVID-19.

Levan Kakava stressed the importance of the support of Turkey for cooperation between the two countries, as well as for the unified management of the state border.

The Revenue Service is actively involved in the implementation of the regulations established by the government. Accordingly, the movement of vehicles carrying international cargo on Georgia's territory did not create any delay.

"Due to the current situation, control enforcement procedures are being carried out as efficiently as possible. The imposed restrictions do not apply to trucks. On the contrary, we further simplified customs control restrictions to allow cargo to move. Despite the current situation, the movement of freight traffic at customs checkpoints significantly increased. Due to the temporary closure of the Turkish-Iranian customs checkpoint, traffic to Central Asia goes through the Kartsakhi customs checkpoint, that is why the transit shipments increased compared to last year," the head of the Revenue Service stated.