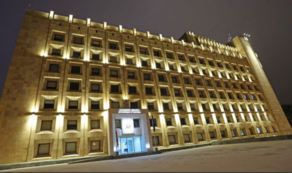 Today marks the 100th anniversary of the Soviet Union occupation of Georgia. The national flag has been removed from the building of the Administration of the Government of Georgia. All flags have been taken down at all administrative buildings in the country.

February 25 was declared the Day of Soviet Occupation under the Order of 21 July 2010.

Pursuant to the Order, flags are removed from state agencies throughout Georgia on 25 February.