I'm ready for everything, Giorgi Gakharia 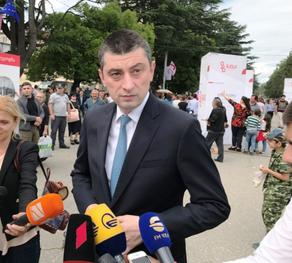 "I am ready for everything", Giorgi Gakharia, the Prime Minister of Georgia responded to a journalist's question whether he is ready to answer the Prosecutor's question on the so-called threat letter.

According to Mamuka Khazaradze, Giorgi Gakharia sent him a threatening letter before the 2018 Presidential Elections.

The so-called threat letter submitted by Mamuka Khazaradze to the Prosecutor's Office was made public by the investigating agency itself. According to the letter, Gakharia had three demands for Khazaradze, to switch TV Pirveli to Imedi TV tendency, high degree of objectivity for Artarea and to officially declare National Movements regime unacceptable. It is noteworthy that Khazaradze posted a Facebook post of content similar to the threat just before the Presidential Election last year.